I have made many little changes in my own copy of Djasiantech's excellent Mega_City_Tokyo_(Extended). I am sharing them here in case others find the ideas useful.

I deciphered the Eden file format, and can now create highly detailed accurate maps of any Eden world. Here is an annotated map of Mega City Tokyo: 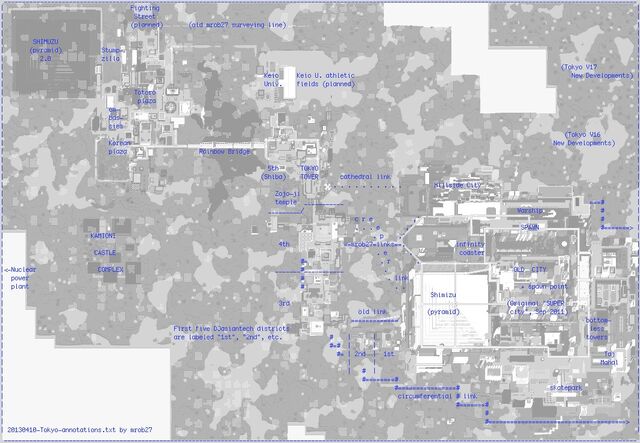 One area I've been spending a lot of time is Korean Street Plaza, which I call simply "Korean plaza". Among other things, I made the transit system function as both a local and express (looping indefinitely) in both directions, and moved the ice-slide track closer to the building so the Korean flag is more easily visible: 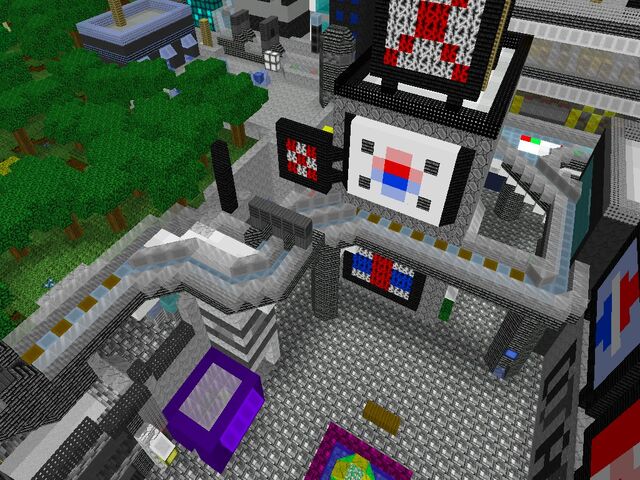 Overview of Korean Plaza with transit system converted to local and express lanes.

Djasiantech's bridge is clearly meant to be [Rainbow_Bridge_(Tokyo) Tokyo's Rainbow Bridge]. I reworked the suspension cables to make it more like the real thing: 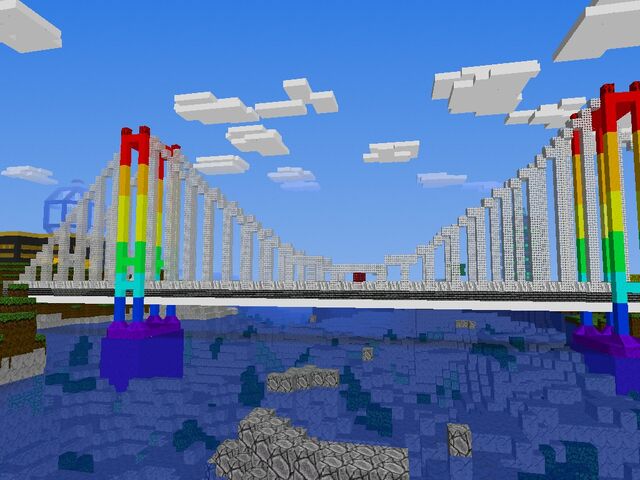 This is an office building with a (purely decorative) Cuboctahedral framework. In the basement there is pedestrian access to the casino in Totoro Plaza and a new shopping mall (still under construction) and food court (finished).

I found this church building. There is a cloud right above it, so it seems natural that there should be an elevator into the cloud, as if you can get to heaven. But there is no place in the church (or outside) where you can get to the water-elevator. It's ironic, or perhaps commentary on religion. 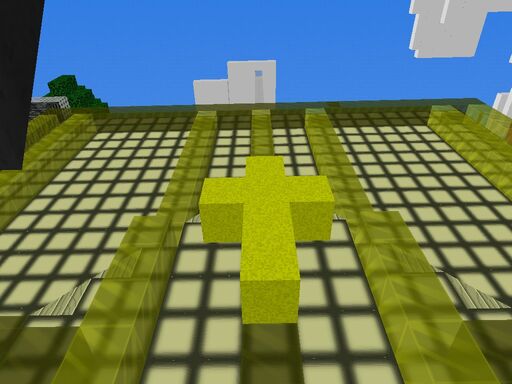 It seems that Djasiantech built the city in several major stages, and at each stage the new parts of the city were surrounded with walls, false-front buildings and other things to prevent you from wandering out into the countryside. Unfortunately, this means that it is now very hard to get around the city, due to the many walls that used to be facades at the edge of a district before a new district was added.

I've been turning many of these into ramps. Here is a gallery:

There's no reason why we should limit ourselves to right angles for the ice-slides. 45 degree turns make things look a lot more natural: 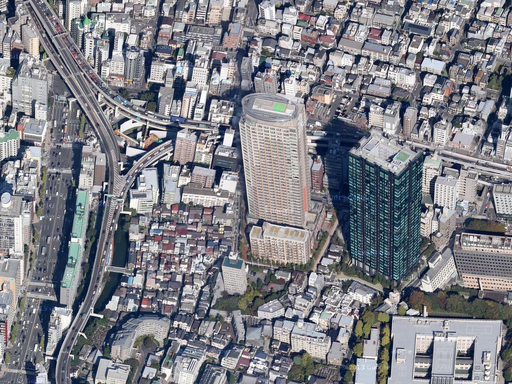 I am gradually converting the right-angle turns to use two 45-degree turns instead:

While working on transit changes I have discovered many voids, and original terrain (grass and dirt) under the tracks. Photos like this show that the ice-slides in Djasiantech's Tokyo were built to grade (that is, on the surface of the original ground) before the city was built around them: 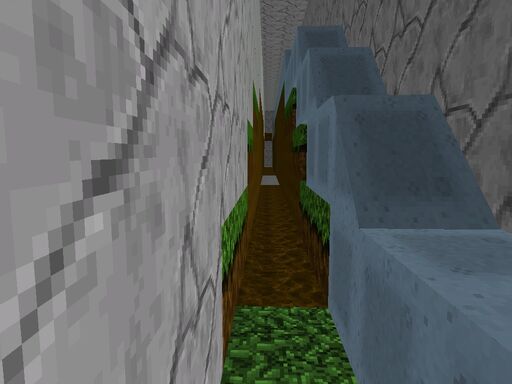 Here's a small change in the Keio University area: Changing the building number "69" to say 69 in Chinese/Japanese traditional writing: 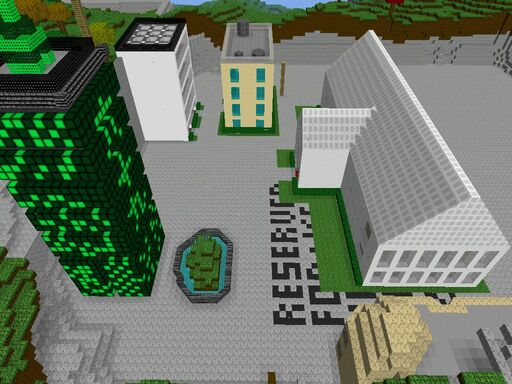 When I narrowed the Creeper ice-slide tunnel, it made a lot of room for vending machines: 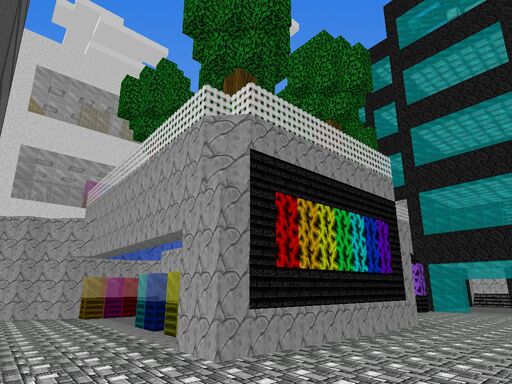 I also had room to add a new entrance, which leads down a winding stair to a reproduction of one of the Masonic temple rooms from my Mooncraft world: 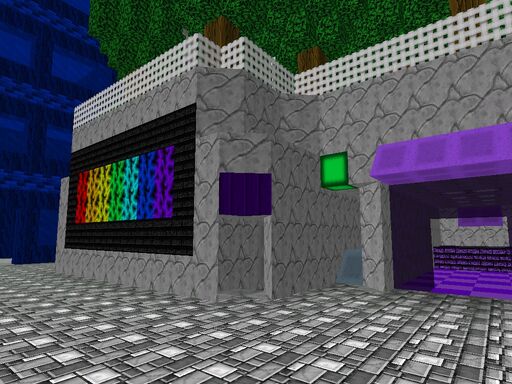 I like to make use of voids, or fill them up, or at least know when they exist. So whenever I find a void, I add a little door to it: 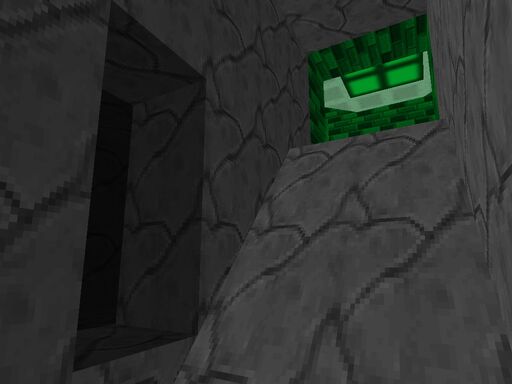 This is a copy of a gallery from Mega_City_Tokyo_(Extended). In 3 different broswers (Safari on iPad, and Chrome and Safari on Mac), it displays as a big blank rectangle, you can't see any images. But galleries work properly in this blog article.

Retrieved from "https://edenworldbuilder.fandom.com/wiki/User_blog:Mrob27/Little_Tokyo_Changes?oldid=19056"
Community content is available under CC-BY-SA unless otherwise noted.