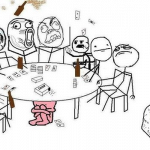 94 Edits since joining this wiki
June 7, 2012
Revision as of 20:09, June 15, 2012 by Acetyn98 (wall | contribs)
(diff) ← Older revision | Latest revision (diff) | Newer revision → (diff)
|
1
Message Wall:Acetyn98
This is my first wiki that i have joined, and i plan to edit as much as I can. I play Eden constanly ever since I downloaded it. Right now im only working on one world and it called Great Phildonia, and i just released v2.

It was the dawn of 2008, Americas economy was in a horrible state yet the Internet flourished like never before. I was a lone traveller on the vast superhighway called the internet. I was in the midst of writing my novel when i got an email from a friend in college (i never went to college) It stated "strtin a gaming site u in?" and i responded "Ohhhhh yeah" so we held an online chat with 6 other friends and we started a small gaming website called: controlliacs, It gave you news about gaming, game reviews, and forums. I was in charge of game reviews, my first review was on Tom Clancys Rainbow Six Vegas, which recieved a 8 out of 10. I continued reviewing until 2011 when my friend dropped out of college and went to go work for gamespot.com. He then shut down the website and i lost my fun job as a game reviewer. I started playing eden after i downloaded to review it and i couldn't stop playing, and i frequented the wiki since it started but i never joined until recently. and that is my story of how i got here.

PS: i told my friend about this wiki since he plays too and he might join.

I dont have a gamertag because i dont see the point in paying for multiplayer unless its an mmo.

And my wii code is: I DONT HAVE A WII CODE CAUSE THEY SUCK

Thanlk you for reading and have a nice day =)~

Retrieved from "https://edenworldbuilder.fandom.com/wiki/User:Acetyn98?oldid=6624"
Community content is available under CC-BY-SA unless otherwise noted.