Mega City Tokyo Extended is the largest city ever built in EDEN - World Builder. The creator who first designed the city which was originally called "Mega City Tokyo" is unknown. However, as of 2012, the Extended version of the city is being constructed by "DJ AsianTech" who is currently working on making the city larger and somewhat more realistic to the actual city of Tokyo, Japan. He has also been inspired by the architecture of Mega City One (Judge Dredd), Neo Kobe City (Snatcher), and New Port (Ghost In The Shell).

The first installment of the construction series was named as "Mega City Tokyo X" which was released on November 8th 2012, but that name was soon abandoned due to the fact that it wasnt showing in the search. Despite the name change "Mega City Tokyo X" is still shown  throughout the city on buildings, billboards, neon signs, and painted in graffitti.

Mega City Tokyo Extended was supposed to have an extremely large population but due to either a bug or programming error, the creatures that populate the city dissapear or get deleted after the "Loading..." screen appears. A video of the error is shown below.

The Tokyo Tower of EDEN was one of the most time consuming buildings ever created in the Mega City Tokyo X project. It resembels the appearance of the Actual Tokyo Tower in the Minato Ward, but smaller. It is one of the most visited landmarks in EDEN. Tokyo Tower is a communications and observation tower located in Shiba Park, Minato, Tokyo, Japan. The tower acts as a support structure for an antenna that is used to broadcast signals for Japanese media outlets such as NHK, TBS and Fuji TV.

A Buddhist temple located in the Shiba neighborhood.

A large pyramid made of sand in the heart of Tokyo with a Large Temple, a few businesses, a church, and some small houses.

Shimizu Pyramid 2.0 is the second pyramid built from the bedrock to the sky. Unlike the first one, it is made entirely of blue glass. It is pretty much a city inside of a pyramid with a Grocery Store, Garden, School, Hospital, Apartments, Metro Rail, Bank, Apple Store, Religious Temple and Amusement Park.

Deep beneath the city lies a labarinth of hidden biomes. There are many hidden enterances to the underground biomes but they are very hard to find. The amount of these hidden biomes are unknown but it is estimated that there are well over 40 different kinds. 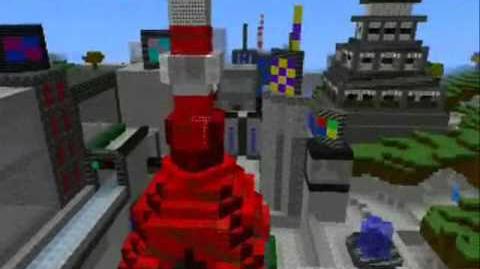 The Kaminoi Castle, built on a desolate mountain plateau, is an impregnable fortress. The castle's sturdy walls and the beautiful cherry blossoms won high praises, but during the era of Japan's unification, the ruling government felt that an accessible location was more befitting for the capital, and thus this castle was eventually abandoned. The new era had no use for a remote fortress such as Kaminoi Castle. Since the castle was in such remarkable condition even after it was long abandoned, rumors began to emerge about the grounds being haunted by the Yurei (Japanese Ghosts). People have stayed far clear of the castle ever since. The castle is surrounded by a large forest on the Koto-Ku island.

A giant stumpy was built on top of the hill that overlooks the buildings on Koto-Ku island. It is a common visiting place for the Stumpy creatures.

Fighting Street (ファイトストリート) (Japanese: [Faitingu Sutorīto]) is an area on the Koto-Ku island which is popular amongst gamers, nerds, bronies, and otaku fans. The main building with the words "Fighting Street" in katakana is where most of the assemblys are held, which include Pokemon Battles, DDR, Anime Conventions, Gaming Ceminars, and guest appearances from celebrities in the anime and gaming industry such as Hideo Kojima, Nobuo Uematsu, Hiromu Arakara, and Yoko Shimomura. It is a very highly populated area.

The most popular fast food place in Mega City Tokyo is McDonalds. They can be found all over the city.

Friends of DJ AsianTech have gotten together to try to emulate a day to night sequence that automatically changes the sky colurs during gameplay. Although they have gotten it to work, at times it may cause the game to either freeze, behave sluggish or even crash completely. Instead of a 24 hour day to night transition, in gameplay it is shortened to 24 minutes a day in daylight saving time. Here, it is sped up to show the first 12 minutes in approxamitly 1 minute and 30 seconds. DJ AsianTech is still working out the bugs, but hopefully it will become a pretty interesting modification to the game. Hopefully if might be added.

Retrieved from "https://edenworldbuilder.fandom.com/wiki/Mega_City_Tokyo_(Extended)?oldid=17227"
Community content is available under CC-BY-SA unless otherwise noted.