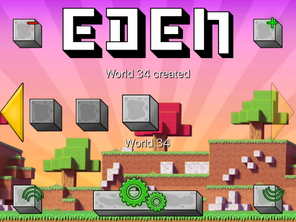 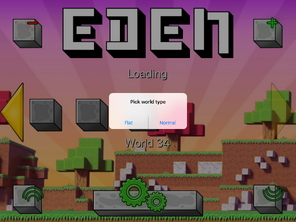 Many different formations of blocks are randomly generated in Eden with the use of the app's built in terrain generator. These currently include hills, stone quarries, overhangs, volcanoes, mountains, trees, beaches, and more.

Flat Worlds were a feature added in 1.5.2. The terrain generator makes the world completely flat. Flat Worlds dont have any variation to the terrain or any clouds in the sky. There are glitches in a flat world, and one such glitch is platforms that are not uniform. The Flat World is useful for building large cities, and for catching Creatures!

A Normal World is one of two world layouts the player is given to choose upon loading a World. This was the only layout option for a beginning world before update 1.5. Normal Worlds contain naturally occuring clouds in the sky, trees, Creatures, randomly created hills and stone banks, and caves (before caves were removed in update 1.6). Dark Stone blocks were also removed, as they were found in caves. Normal worlds also have random patches of stone around the world. They are generally used less than flat worlds because of the limited level and flat ground that normal worlds provide, but they give more freedom in the way of building into hills, which could lead the user to create tunnels and underground houses with more ease.

Creatures are several non-playable characters in Eden - World Builder that were introduced in Update 1.7. You can do many things with creatures such as destroying, burning, catching or painting them.

Throughout the history of Eden, various world editors, Vuenctools and the Eden World Manipulator, have been created in order to make building easier. This includes changing blocks, moving buildings and making custom mountains.